Faith and her transformation

Moth in my classroom. Thick and a deep blood red, she at first looked to be dead until she spread her wings and revealed the sunset-tinged eyes on her wings to scare off any likely predators. After modeling for us briefly, she spread her wings even wider and took off, landing on the boxes on top of the bookcase.

I took the students’ attention off her presence until later in the day, during a different class. When she hadn’t flown out, I knew I had to save her from dying on a box in an ancient, dusty classroom.

Climbing on a chair and stretching toward the corner, I picked up a dusty fake potted plant. I brushed through the leaves in search of a hint of red. Nothing. I put the plant on my desk and returned to the mysterious land of the hidden top shelf. Memories started to trickle. But memories of what?

Vague memories. A dragonfly. My outstretched hands; him flying into them.

I shook it off and reached for another fake plant. Then an old, student-made clock. Finally, I found her in an empty Easter basket.

She was impressive. Powerful and so beautiful. When a student named her Delilah, I knew that was her name. A strong, powerful name for such a majestic symbol of transformation.

But this symbol was afraid of my high school students. She flew around the room searching for something. We opened windows.

That’s not what she wanted. At one point, Delilah fell behind a file cabinet, but my students and I could not be deterred. We needed to rescue her.

When we did, she rested and trembled, seeming to breathe heavily. That’s when I first heard her. Later, when the classroom was emptying and it was just me and one student, she called to me again, but not my real name. It’s a name I don’t know that triggers a flood of recognition.

“Faith,” Delilah says. Her voice is weak and ragged with the raspiness of a rough run. “It is time.”

Her answer is simple. She stepped into my hand.

“You have been given a wealth of lessons, my dear,” she said. “It is time for you to remember and share those lessons.”

Something stabbed at my heart. I fought the need to cry.

Delilah in my hand, she tickled my fingers and moved toward my palm, leaving four eggs in their sticky sacs. She turned and tickled my palm again before leaping off toward the window.

“It is done,” she said. And I understood.

She laid eggs where she knew they would be safe. With me.

She flew out the window with only a brief glance backward, knowing, I felt instinctively, that she had given birth to a mysterious truth that I would nurture and birth.

And when I placed the eggs on a leaf in the garden downstairs, the dragonfly that hovered nearby seemed to approve.

“It is done,” he seemed to say. “You are ready.” Then Teacher flew away.

I couldn’t understand why I felt like hiding in my classroom and sobbing.

No, that’s not true. Yes, I could understand. Change hurts sometimes.

Until next time, my friends, I remain, ever faithful, 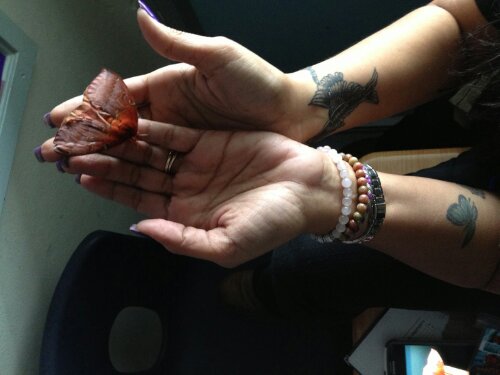 This site uses Akismet to reduce spam. Learn how your comment data is processed.

Stories from The Garden